Two teams will represent the Ricki Herbert Football Academy in a tour to Malaysia in October.

Announcing the tour, head coach Kale Herbert said both teams would be staying at the Kuala Lumpur Football Association Centre where they will play games against top Malaysian youth sides.

“This tour is a fantastic opportunity for young RHFA players to continue their development,” Herbert said.

“The tour also consists of RHFA trainings, sightseeing and much more.”

Herbert said the opportunity for the tour had come through academy founder Ricki Herbert’s recent work in Asia where he had been working as a broadcaster covering the Indian Super League. 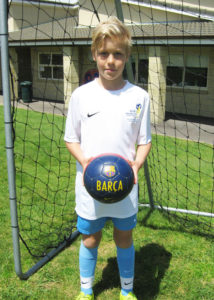 One player already looking forward to the tour is Arlo Fruh (pictured), 11, a Year 7 student at ACG Strathallan. His school celebrated Arlo’s inclusion in the touring squad with a story on their website.

More details about the Malaysian tour will be announced soon on this website.