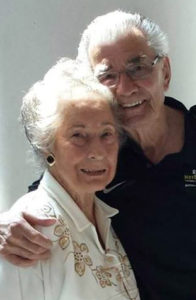 Football has lost one of its great supporters in Shirley Herbert who has died in Auckland after bravely battling cancer.

Shirley (86) was well known to football supporters as the wife of football coach and administrator Clive Herbert, and mother of former All White player and coach Ricki Herbert.

Shirley’s influence on her family’s sporting achievements stemmed from her own success as a young athlete.

Encouraged by her father, who was a champion runner, Shirley became the Auckland 100-yards sprint champion.

In 1955, she married Clive, a national cycling champion on road and track, and the pair began a sports-loving partnership that lasted six decades.

Shirley and Clive were supportive parents for daughter Deborah and son Ricki as they grew up in South Auckland in the 1960s.

Ricki has often credited his parents for his success as a footballer, saying they have been a major influence throughout his career.

As well as encouraging her family’s football activities, Shirley was also a partner in the family’s harness racing enterprise which saw Clive and, briefly, Ricki training and driving pacers.

Shirley’s funeral will be held on Monday 8th August 2016, 1.30pm at the Purewa Crematorium, Meadowbank, Auckland.