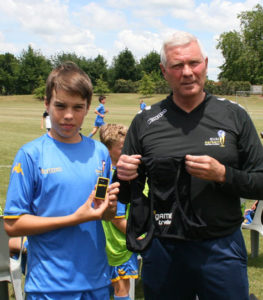 After successfully piloting the use of GPS tracking technology to help coach players, the Ricki Herbert Football Academy now plans to roll out the system nationwide.

Founder Ricki Herbert said the support of major sponsor Treasure8 had enabled the academy to use the tracking devices which enable coaches to monitor every movement by a player during games or training sessions.

“It’s a fantastic use of technology,” Herbert said. “We can monitor players’ movements throughout a game or session, and analyse ways in which we can help them improve.”

The sponsorship of Treasure8 had enabled a set of trackers to be used in the Waikato and with the academy’s national squads, proving their worth and opening the way for the RHFA to introduce them over the next year to the rest of its centres nationwide.

The units – (see photo) – fit snugly into a vest worn beneath a player’s shirt.

When data is uploaded from it, coaches can study an accurate ‘map’ of the ground and distance covered by each player, enabling analysis of movement, speeds and workrate.

“While a coach can get an impression of these key measures based on experience, nothing beats having the accurate data.

“Technology is being increasingly used in sport and it’s important we are at the leading edge, to give our players the best opportunities to develop.”

Herbert said the academy was extremely thankful to Treasure8 who make the Realize brand of health foods.

The Realize logo features on the kit used by the academy’s international squads.

How the technology works

This brief video shows how the players wear the trackers and can be monitored during games.

The Treasure8 corporation, a San Francisco-based food innovation and technology company, is on a mission to solve the nutritional challenges and environmental stresses of a growing global population.

The Treasure8 team develops, produces and deploys game-changing, delicious food ingredients, processes and products that are healthier for people and the planet.

Click here for more information about their partnership with the Ricki Herbert Football Academy.