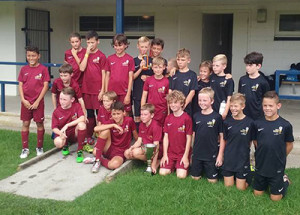 Watched by academy founder Ricki Herbert, Tauranga have retained the Clive Herbert Challenge Cup after holding off Bay of Plenty rivals Taupo in a nine-goal thriller.

The two teams representing the Tauranga and Taupo talent development centres met on Sunday April 3 to decide who gets bragging rights at least until the next staging of the challenge cup.

Playing at The Blue Rovers Club grounds at Morland Fox Park, Greerton, the match finished 5-4 in favour of Tauranga.

The Ricki Herbert Football Academy thanks Roy Brown for refereeing the match and The Blue Rovers Club for its support of the fixture.