Academy founder Ricki Herbert has thanked all those involved in the Christchurch United international tournament for making it a successful venture for the three teams that participated.

The Ricki Herbert Football Academy fielded teams in the U-14, U-13 and U-12 sections of the tournament held during the July 2022 school holidays.

Said Herbert at the conclusion of the tournament: “I’d like to take this opportunity to congratulate all the players for their outstanding performances throughout all three respective age groups. And for the quality of play that each team put on the park.

“The tournament has certainly provided not only team but individual player challenges which have been great for all of the players’ ongoing personal football development.

“A special thank you to Kale Herbert, Dylan Morris and Dave Douglas for their coaching expertise and support across their respective teams.

“Thanks also to Braedon Makgill for his management support and Emma Young for her amazing administration support for the academy.”

Herbert also extended the academy’s gratitude to Dave McCracken for his support and assistance over the fortnight the teams had been in Christchurch.

Finally, Herbert said the players’ participation would not have been possible without the backing of families and supporters.

“Thank you sincerely to all parents and caregivers for your ongoing valued support of the RHFA. And we look forward to working with your child again as the year progresses,” he said. 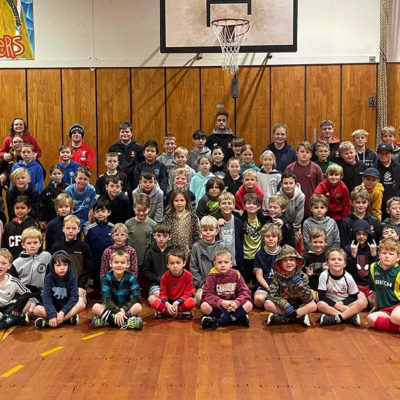 Heavy rain may have forced activities indoors but it failed to dampen the enthusiasm of...