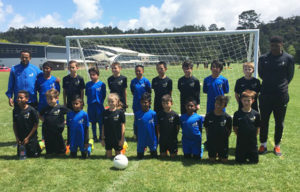 The North Shore and Papatoetoe talent centres for the Ricki Herbert Football Academy have ended their 2016 programme with games against each other.

Playing at Pinehurst School, Albany, the Under-11 North Shore team lost an eight-goal thriller by 5-3 to the visitors from Papatoetoe.

In the second game, the older players from the North Shore centre took on a team of parents with the match ending in an entertaining 1-0 result to the parents.

Coach Sammy Negash said the games were an excellent way to end Term 4 and he thanked the players’ parents for supporting the games and the talent development centres.

Players have now received their end-of-year reports, giving them the opportunity to see positive feedback from their coach and to identify areas in which they work on next year.

Photographs: Teams that took part in the end-of-year games day.