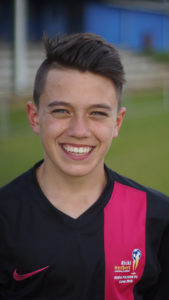 Tauranga’s Mirko Brinkmann (left) has returned from his three-week training stint with top English club Fulham, describing it as a “great experience.”

In an interview with RHFA Head Coach Kale Herbert, Mirko said he was now keen to put what he’s learned into action this season as he returns to local football in Tauranga.

He said for three weeks, he trained twice a day except on Fridays and Sundays when the Fulham academy organised matches.

The training was intense, he said, but he enjoyed it. The academy had players under 12 but also older players who were there on Under 18 scholarships.

In the second week, Mirko needed to use the club’s physiotherapy facilities and it opened his eyes to what was available.

At the end of week three, Mirko got to play for Fulham’s U-12s against Chelsea U-12s, one of the highlights of his trip.

In late 2017, RHFA will hold another national camp in partnership with Fulham FC, giving another academy player the same opportunity as Mirko.

And what’s Mirko’s advice to whoever gets to travel to Fulham next?

“Get the most you can out of it – make the most of everything.

Facebook users can watch the video interview with Mirko by clicking here.