These days coaching the Maldives national team, Herbert will likely notice something interesting when he reviews the latest Fifa world rankings.

His new team, hailing from an Indian Ocean island nation with a population of around 350,000, are now ranked above his old team, who he led unbeaten through three matches at the 2010 World Cup.

Along with being one of the world’s most geographically dispersed countries, the Maldives is the smallest Asian country in both land area and population and the world’s lowest country with an average elevation of just 1.5 metres above sea level.

Despite their slip of two places in the rankings to 160th, they have actually moved ahead of an All Whites outfit that has fallen a further 12 spots to a lowest ever berth of 161st.

The All Whites were ranked 90th when Herbert finished his eight years in charge of the team at the end of 2013 and their current lowly position, behind countries including Comoros, Moldova, South Sudan and Curacao, is largely a reflection of the lack of games they have played since.

New Zealand played five matches in 2014 and just three last year, a number current coach Anthony Hudson said was a world-low in 2015 when expressing his frustrations earlier this year about his team not playing enough matches.

The team’s last match was a 1-0 away win against Oman in November, with New Zealand Football unable to secure them a fixture in the international window at the end of last month.

Maldives played six matches in 2014 and 12 in 2015 as part of Asian confederation qualifying for the 2018 World Cup and the South East Asia Football Federation Championship.

They have risen 16 places since Herbert, who also coached the Wellington Phoenix from 2007 to 2013, took the reins in September last year, winning three games and losing four.

The All Whites did play seven internationals in 2013 and 13 in 2012 as part of Oceania qualifying for the 2014 World Cup, and their ranking is expected to improve after the looming Oceania Nations Cup, which runs from May 28 to June 11 in Papua New Guinea and sees the winner qualify for the 2017 Confederations Cup.

New Zealand are also still the highest-ranked team from the Oceania confederation, with Samoa, American Samoa and the Cook Islands the next best in a tie for 170th.

The world No 1 spot has been reclaimed by Argentina, ahead of Belgium, Chile, Colombia and Germany. Spain, Brazil, Portugal, Uruguay and England round out the top 10. 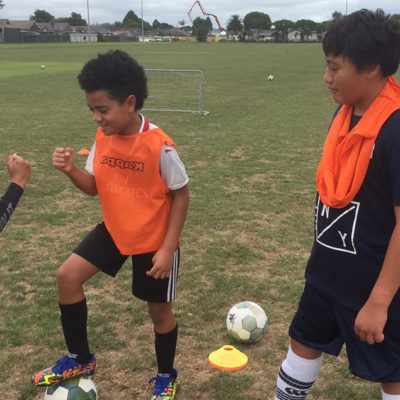 Young players have spent two days in the summer sun, developing their football skills and...