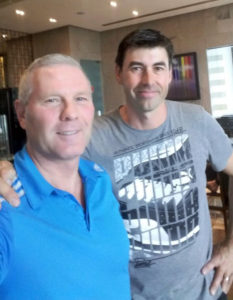 Two of New Zealand sport’s most successful leaders have caught up in India where both have become well-known as coaches and television commentators.

Football’s Ricki Herbert (left) and cricket’s Stephen Fleming got together for a breakfast chat this week as both prepared for roles in broadcasting.

Former All White player and coach Herbert is in India till December to present and commentate on the India Super League for STAR Sports while Fleming will commentate on New Zealand’s cricket test against India, starting on Thursday at Kanpur.

The pair had much to talk about as their careers have taken similar paths between New Zealand and India.

Fleming, who played 111 tests and 218 one-day internationals for the Black Caps, first coached in India in 2008 and was this year appointed coach of Rising Pune Supergiants in the India Premier League.

Herbert followed his successful stint as coach of the All Whites and Wellington Phoenix with a term as coach of NorthEast United in the India Super League in 2014.