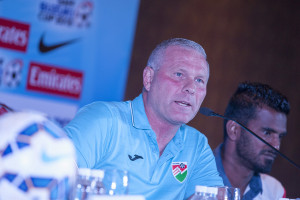 Ricki Herbert will coach Waikato’s contender in next summer’s New Zealand national league after being appointed to lead Hamilton Wanderers in the competition.

Wanderers play in football’s Northern League during the winter but the club represents the Waikato and wider Bay of Plenty region in the national competition.

The Hamilton-based side finished ninth in last summer’s league, prompting the club to advertise the coaching role, previously undertaken by former All White Mark Cossey.

Herbert, the founder of the Ricki Herbert Football Academy and former coach of the All Whites and the Wellington Phoenix, was unveiled as the new coach.

“From what I’ve seen in a short period of time, there’s some good young talent coming out of a range of clubs, and I’m keen to foster that and have those players as part of the summer programme, whether it’s in the youth league [which Wanderers won in 2016] or being attached to the main senior team,” Herbert told Stuff.

Herbert moved to the Waikato in early 2017 to become the Director of Football at St Peter’s, Cambridge.

Cambridge is also the ideal base for Herbert’s involvement in the RHFA which now has 11 centres in the North Island. He is also Technical Director for Cambridge FC who play in the WaiBOP Premiership.