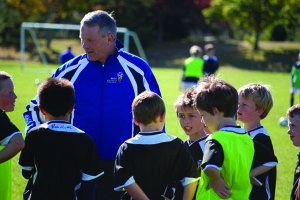 Ricki Herbert will consider coaching roles in New Zealand or abroad after ending his eight-month stint as head coach of the Maldives.

The former All Whites and Wellington Phoenix coach returned to New Zealand this week after 14 matches in charge of the Maldives national side.

“I initiated the early termination of my contract because I felt the Maldives administration wasn’t providing the opportunities for me to develop a team capable of performing internationally,” Herbert said.

When Herbert was appointed last September, he was given a brief to bring through promising players and told he would get chance to work with them at training camps.

“Unfortunately, that never eventuated. While the team got plenty of fixtures because of participation in the World Cup and two tournaments, I wasn’t getting the chance to work with the players leading up to games,” Herbert said.

Last week, Herbert’s team lost 2-0 to a Yemen team that had been in training camp for five weeks.

“As a coach, I just want to spend time on the grass, working with players and helping them learn how to compete to an international standard. This clearly wasn’t happening and I felt the lack of progress was unacceptable.”

The 55-year-old Herbert was also concerned that structural changes to the national administration, demanded by FIFA, were going to hinder any progress.

“FIFA had given the Maldives a May 31 deadline to elect a new congress or face sanctions which could include a ban on international competition. The chairman who hired me had gone and his replacement was focussing on the political issues around the new congress.

“I couldn’t see that anything was going to change that would enable me to do my job to the standard I wanted.

“I approached FAM (Football Association of Maldives) and asked if they would release me early from my contract.

“They were fine about it and the decision to leave was amicable.”

Of the 14 games with Herbert in charge, only three were played at home. Despite that, Herbert-coached sides won six and drew one – a winning ratio of 43% which was an improvement on his predecessor’s 16% success rate.

The matches were in two tournaments – the South Asia Football Federation Championship in India, and the Bangabandhu Cup held in Bangladesh, as well as qualifying games for the 2019 Asian Games.

Having returned to New Zealand, Herbert will spend time working with coaches at his locally-based football academy while he contemplates the next step in his coaching career.

The academy recently announced a partnership with English Championship club Fulham, opening the way for promising youngsters to spend time with the London club’s own academy.

“Our academy runs full-time and this year we’ve got teams going on tour to Australia and Europe,” Herbert said.

Since leaving his role with the All Whites and the Phoenix in 2013, Herbert has coached in the fledgling Indian Super League, worked with FIFA’s Technical Study Group at the 2014 World Cup in Brazil and coached the Papua New Guinea U-23 side to a bronze medal at the 2015 Pacific Games.