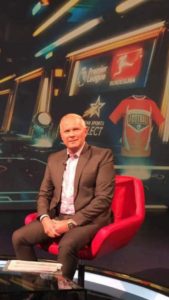 As football competitions reach their peak in the Northern Hemisphere, interest in them is generating media interest all over the world.

And that includes India where football is attracting millions more fans to the sport every season.

The founder of the Ricki Herbert Football Academy was invited to India following his previous work as a football commentator and sideline analyst during the India Super League season.

Herbert has maintained an affinity with Indian football since coaching in the ISL in 2014 and then returning three teams during his term in charge of the Maldives national team.

Photo: Herbert on the set of LTF this week.