Former All Whites coach Ricki Herbert has been kept on his toes working with budding young Taranaki footballers at a three-day coaching clinic at Inglewood’s Karo Park. 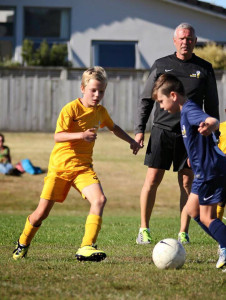 RICKI HERBERT may no longer be calling the shots as head coach of New Zealand’s top two football teams, but he’s still totally committed to the game.

The former All Whites and Wellington Phoenix coach has been in Taranaki this week with staff from his Auckland-based Ricki Herbert Football Academy.

The academy held a three-day coaching clinic at Karo Park on behalf of the Inglewood Football Club for players up to 17 years old.

The 53-year-old is these days juggling helping out at grassroots level while holding down important positions with other football groups, including world body FIFA.

“I’m really sinking my teeth into this.

“We’ve just got back from America [Texas], where I took a cross-section of kids ranging from 13-15 from all over New Zealand and they played a dozen games,” Herbert said.

“It was just fantastic for them and for me to be there and see it all unfolding.

“They were all from our academy and not the best players in the world, but they performed very well.”

The former All Whites defender retains links with the Phoenix club he helped form and was head coach of from 2007 to 2013.

His role these days with the Phoenix is as a consultant centred on technical development and support in creating pathways for youngsters to come into a professional environment.

Herbert said work in this area had resulted in the establishment of an academy for players aged 13-18 at Wellington’s Scots College.

“That’s started a trickle down to there now being more opportunities for New Zealand-based players,” he said.

Herbert recently picked up a plum contract with Fifa that will see him working for it at this year’s World Cup in Brazil in June/July.

“I’m off to the World Cup for five weeks,” he said.

“I’m one of 14 people from around the world who have been selected for the Fifa technical study group.

“I leave New Zealand on June 7 and will be there right through to the finals.”

He said the study group, led by ex-Liverpool and France manager Gerard Houllier, would identify trends and tactics worldwide and how teams were playing.

“There will be a massive document that comes out at the end of the tournament and every one of us will have contributed to it,” Herbert said.

Meantime, rumours circulating about Herbert possibly being hired to coach Sydney A-league side the Newcastle Jets were just that, he said.

“No, I haven’t had any discussions with anyone from the A league.”

Asked if he would be interested in getting involved with the A league again, Herbert said he didn’t know.

“When you’re a professional football coach doors are going to open and close at any stage.

“I don’t know until someone actually picks the phone up and says do you have any interest, and discussions would start.”

Herbert coached the All Whites to the 2010 World Cup and said coaching remains a passion.

He had no regrets about quitting as coach of the All Whites after the team’s 9-3 series loss to Mexico in the Intercontinental World Cup playoff series last November.

“I had eight years coaching [the All Whites], which is a good tenure from a manager’s perspective.

“But you’ve got to get out at some stage,” Herbert said.

“I’ve always been incredibly proud of it and I will always be supportive of it.

“It’s good to see them back playing.”

Herbert said he had been invited to watch the All Whites play a friendly match against South Africa at Mt Smart Stadium in Auckland on May 30.

“They are our national side and they need to play meaningful sides if the expectancy is for them to go back to World Cup, so good on them.”

Herbert said he followed the fortunes of the Phoenix A-league team very closely.

“The Phoenix is still something I feel still strongly attached to because Terry Serepisos and I helped set the club up from nothing,” he said.

“I’m not sure many people around the world get the opportunity to do that.

“I probably wouldn’t want to do it again, but it was a helluva journey.”